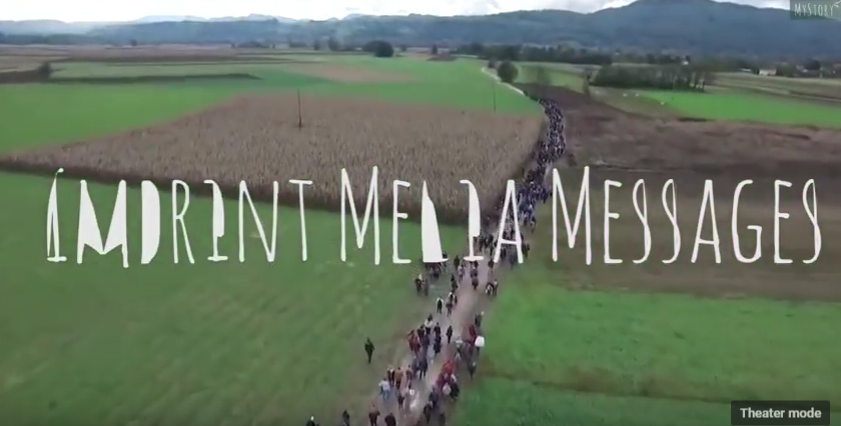 Directed by Laszlo Hartai from the Hungarian Moving Image and Media Education Association, Imprint Media Messages explores the effect that negative media representations of migrants and refugees has had on the perceptions of Hungarian citizens and how these perceptions have been exploited by those in power.
The documentary forms part of the #MyStory: Media, Migrants & Refugees Project funded by the European Commission’s Europe for Citizens Programme and coordinated by The European Association for Viewers Interests – EAVI.

The most serious affair of the second decade of the 21th century is the migrant crisis, which shocked Europe fundamentally, provoked many debates and stays unresolved since its outbreak. The appearance of the people who were forced to leave their distant homes gave rise to fear and anxiety at the border regions of Hungary, since inhabitants there are not familiar with other cultural codes. Though, at the same time, it also facilitated enormous powers for providing help. The medial campaign of the Hungarian government exploited this situation full of contradictions. They wanted to strengthen their positions by huge, alarming billboards; television reports embedded in a peculiar style of narrative, selective display of foreign news and last but not least, with a targeted referendum against the “menacing barbarian enemies”. Meanwhile, the government succeeded in planting the feeling of fear and distrust in the minds of that part of the population as well, who never ever saw migrants actually. Our film provides a summary on how the media reported on the situation in Hungary and shows how everyday people saw the situation.

The participants of the public educational system in Hungary usually react to “sensitive” questions that are dividing the society with fear or extraordinary precaution. Students often lack the courage to ask since they are afraid of the dismissive responses, while teachers try to avoid the stigmatizing charge of dealing with politics in class. In addition, parents don’t want their children to suffer the negative consequences of their opinion they brought from home, therefore, most of the time they ask them to remain silent. The same was shown vigorously regarding the migrant issue.

The film also introduces how media education and analytical-interpretative discussions between the teacher and the student could ease the prejudices against others, how important it is to deal with the public sphere, and how useful it is to compare and clash the opinions. Teachers, parents, university students and citizens of Szeged who took part in the film, with the help of the moderator, try to find out how it is possible to get closer to the exploration of coded purposes with the tight analysis of media contents and the observant reading of particular news by carefully monitoring the pictures, texts and sounds within them. The critical reading of media texts, the recognition of the notions used tendentiously by politicians and receiving information on intercultural matters can guarantee that solidarity towards those who suffer can be awaken in young people and that the often distinctive difference between their views can’t function as a barrier that prevents exercising the minimum tolerance.